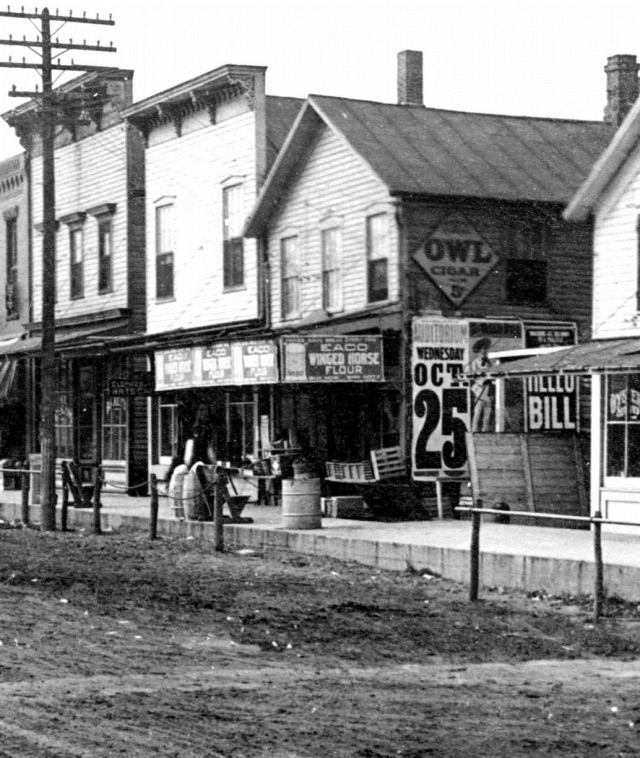 The first theater in Prophetstown, according to our records, was opened in 1904 in the Dudley building. Frank Dudley was the owner. The structure was built in 1903 at 351 Washington Street. Dudley and his wife were both morticians, so they used the South portion of the building for a mortuary and furniture store. A good many mortuaries had furniture stores back then. The North portion becoming the theater. If you look to the extreme left in the photo below, you can see the “Dudley’s Auditorium” sign in the window. As of 2018, the balcony is still inside the building.

Shole’s Hall was built in 1874 with a dance hall on the first floor and the Odd Fellow Lodge above. It was, sometimes, referred to as the Sinnissippi Hall, because the Odd Fellows Lodge was the Sinnissippi Lodge No. 508. It was used for dances, parties, and roller skating. School graduations and other school events were held here, as well.

The skating rink function ceased in 1908. It is the building on the far left below.

In 1911 or 1914, the Dreamland movie theater was opened in the Shole’s building, showing silent movies. A View from Thunderbolt, 1859-1959 states that it became the Dreamland in 1911, but in the Echo it said that Carl Marvel opened Dreamland in June 1914. The next owner was Charles E. Seeley.

Later, it was owned by J. A. Dauntler, who purchased it from Seeley in April 1917. It was often called Dauntler’s. In 1922, Dauntler sold to Louis Roth and moved to Dixon. It was called Dreamland Hall in 1927, when the window sills were replaced with concrete and called the same in an Oct. 1928 ad for a W. J. Thompson fire sale. Dauntler came back in 1930 and took possession of the theater again and it was called The Prophet Theater. According to one article, Charles Schrader purchased Dreamland from J. A. Dauntler in July 1933. However, we know that Dauntler sold to the Marchesi Brothers in 1937, so we are not sure what happened. We do know that 200 new seats were installed, in 1934 .

Dauntler purchased the Shultz and Richards lots, whose buildings had been destroyed by fire in 1935. They were the lots occupied by the present Post Office and Hometown Hardware. He planned to build a new Prophet Theater, but never did.

It then became known as the Town Theater, containing seating for 400. Marchesi Brothers Theaters, located in Amboy, IL, owned it from 1937-1960s.  The Vittito family owned it in 1968, at the time of the last fire.

During remodeling in 1937, roller skates were found, according to the Echo; it had been a roller skating rink at one time, but 29 years had passed and many did not know that. In March 1937 the first movie, after the remodeling was shown. It was advertised as “air conditioned”. An Echo article mentioned that a new well had been drilled behind the building and that the ground water was being used to cool the interior. That was way ahead of its time.

Fire seriously damaged the theater in February 1939, but it was repaired. Finally, it burned on January 7, 1968, and was never rebuilt. As you read through this, notice how many times the word “fireproof” is used.

The Town Theater mailed these out to residents. We have many of these on file, more than can be included here, dating from 1953-1955.

A lady donated this ticket to the PAHS and said the theater burned before she got to use it.