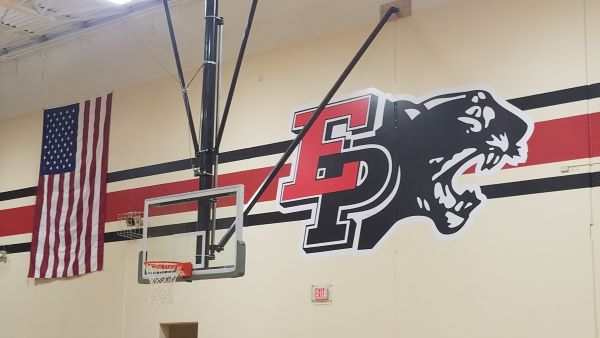 The EP varsity basketball team couldn’t quite complete a comeback Friday night falling to Ridgewood 65-62 at the Orion tipoff Tournament. A 26 point fourth quarter wasn’t quite enough to win the battle of the two 1-1 teams in the tourney.

Both teams were a little sluggish in the first quarter after their day off for Thanksgiving. Reserve guard Jack Clary’s 3-point shot near the end of the period made the score 13-10 Ridgewood after one quarter. The Panthers gave up 19 points to the Spartans in the second 8 minutes, which allowed Ridgewood to lead 32-18 at halftime.

Both teams started connecting more often in the second half and Ridgewood increased their lead to 49-30. A couple steals and 6 straight points from Kolby Franks closed the gap to 13 after 3.

The Panther run continued into the fourth quarter and a Conner Sibley 3 and Franks tip in cut the lead to 57-50 midway through the period. Things remained close and an old fashioned 3 point play from Austin Cole with just under a minute left made it 60-58 Spartans. Made free throws in the last minute gave the Spartans the win.

Franks led the Panthers in scoring with 29 points. Sibley and Caleb Naftzger also reached double figures with 14 and 10 respectively.

The Panthers conclude the tourney Saturday at 3 p.m. against Abingdon-Avon.