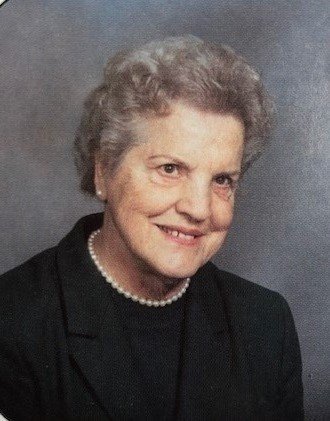 Muriel was born the daughter of Edith Johnson in Minneapolis, MN, February 10, 1925. She graduated from Mound Consolidated High School in 1943, where she was given the title “Best Personality” and wrote the humor column for the weekly student newspaper. In 1949, she completed her studies in Missions at the Moody Bible Institute in Chicago. She then returned to Hennepin, Minnesota, to work for Traveler’s Insurance and care for her mother during a long illness. After her mother’s death in 1959, Muriel was accepted by USAID and entered the Foreign Service. She became one of the first female officers to complete the full two-year posting at the American Embassy in Yemen, she met then-President Lyndon B. Johnson while posted in Korea, and her favorite assignment was five years spent in Pakistan (which included a road-trip to Germany, via the Middle East). While overseas, she spent many holidays with her cousins, Rod and Nancy Johnson and family.

In 1985, after 23 years of service for the US Agency for International Development, she retired to Minnetonka, MN, where she became active in Ridgewood Church.  For the next thirty years she taught Sunday School, women’s Bible studies, and hosted Bible studies in her home. She became known as a witty conversation partner, deep lover of the Word, prayer warrior and beloved friend.

In September 2019, Muriel moved to Prophetstown, IL, living alongside Rod and Nancy Johnson, and was cared for by their daughter and son-in-law, Holly and Dan Paul. She was affectionately known as “Auntie Mur” by her extended family, including Rod and Nancy’s twelve grandchildren, and there was not a birthday or Christmas that passed without a note from her. On November 3, 2019, Muriel met her Savior face-to-face and found rest from the pain of heart failure.

She was preceded in death by her mother, Edith, her cousin Will Johnson (and his Jackie), and his brother, Rod. She is survived by her extended family, all of whom counted her as the dearest aunt and friend one could hope to have.