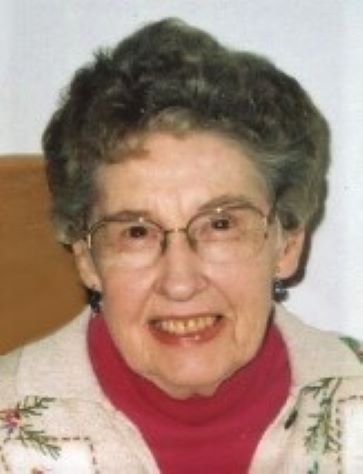 A Mass of Christian Burial will be held at 10:00 A.M. on Monday, November 22, 2021 at St. Ambrose Catholic Church, Erie. Visitation will be from 2:00-5:00 P.M. on Sunday at Gibson–Bode Funeral Home, Erie. Burial will be in the Kingsbury Cemetery, rural Erie. In lieu of flowers, memorials may be made to the Erie Library, St. Ambrose Catholic Church or Resthave. Face coverings are encouraged for those who have not been vaccinated.

Mary W. Hein was born on September 9, 1923 to Earl Jacob Hein and Lula Anna (Young) Hein in Portland Township, Whiteside County, IL. Mary attended Burke, a one room elementary school near her home. She graduated from Erie High School in 1940 and from Mercy School of Nursing in 1944. On March 3, 1945, she married Lt. Robert Willis Blean in Kingman, AZ, where he was stationed as an Army Air Corps pilot.

After the end of WW II the couple returned to the Erie area where Robert farmed for many years. Mary was a busy homemaker and, while raising six children, found time to help with the American Cancer drive, serve as an election judge and hospice volunteer, be a school nurse, play golf and bridge, join a book club, watch many Cubs games and host numerous family meals. Before Robert’s death, the couple enjoyed many travel adventures. Mary was an active member of St. Ambrose Catholic Church in Erie her entire life.

She was preceded in death by her parents, husband Robert in 2007, sister Cecelia Hartzell, brothers Wayne Hein and Richard Hein.

The family is especially grateful for the very kind care from the Resthave staff shown to Mary during her time living there.

To send flowers to the family or plant a tree in memory of Mary W Blean please visit our Tribute Store.