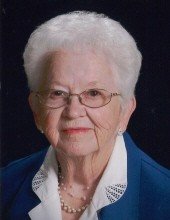 A private family service will be held at the Morrison Chapel of the Bosma-Renkes Funeral Home with Ken Renkes officiating. A private family visitation will precede the service. Interment will be at Grove Hill Cemetery in Morrison, IL. In lieu of flowers, the family requests memorials can be made to Morrison United Methodist Church.

Margaret was born May 19, 1933, in Beulah Heights, IL, to James William and Geneva (Neal) Rodgers. She was a graduate of Galatia High School in southern Illinois. After high school, she attended beauty school in Joliet, IL. Margaret married Clarence Porter Jr. on June 23, 1951, in Benton, IL. He died November 29, 2014. Margaret worked briefly at Climco and General Electric both in Morrison. She was a former member of the First Baptist Church in Morrison and a current member of the Morrison United Methodist Church. Margaret also was an avid Johnny Cash fan.

To send flowers or plant a tree in memory of Margaret H. Porter, visit the Tribute Store.