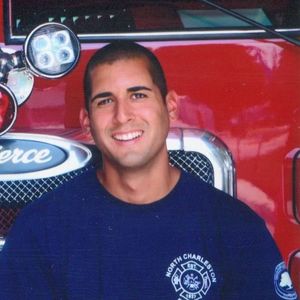 Garrett was born on October 27, 1983 in Sterling, IL to Edward and Jeannie (McKee) Ramos. His happy and positive demeanor was evident from a young age. His magnetic personality won the hearts of everyone in his life. He loved to spend time with his parents, grandparents and friends. He grew up participating in many team sports, especially excelling at basketball and thriving in the team environment. Family, faith and sports laid the foundation for the man of character he would become.

Following in his father’s footsteps, he began his firefighting career at the North Charleston Fire Department in Charleston, SC; a place he loved ever since vacationing there with his family as a child. He was drawn to the history and beauty of the area; surfing the beaches every chance he had. In 2012, he returned to his hometown where he would serve his community at the Sterling Fire Department and later build his life centered around what mattered most to him – his family.

He married the love of his life, Brittney C. Berger on July 23, 2016 in Benton Harbor, MI. They traveled around the world together before the birth of their two daughters Ruthie (3) & Kepa (2). A devoted and loving husband and father, he embraced every moment of every day with his girls – whether painting their nails, playing endlessly or caring for them when they were sick. He started every day with a positivity that all those around him wanted to emulate, bringing joy to all the little moments of life.

It was not only his family who was impacted by and received his joy. He valued every person that came into his life, whether it be neighbors, coworkers or someone he just met. His smile was contagious, his laughter was infectious and his heart was made of gold. He was endlessly generous with his time and in addition to his nearly 10 years of service at SFD, he also served as the Union President for Local 2301. Having served as Acting Captain for the past year, the City of Sterling has posthumously promoted him to the rank of Captain.

If you met Garrett you loved Garrett.

He was preceded in death by his grandparents Gordon & Ruth (Lendman) McKee and Jose & Delia (Vargas) Ramos as well as his Aunt Eileen Marrs and cousins Amanda Tope and Kevin Fuglestad.

There will be a visitation on Wednesday, December 8, 2021 from 5:00-8:00 PM at the Sterling High School Fieldhouse. Funeral services will be held on Thursday, December 9th; commencing with a service at 10:00 AM at Westwood Sports Complex (building 3) followed by a procession to the Main Fire Station where a fallen firefighter tribute will be conducted.

In lieu of flowers, memorials are being requested to benefit his wife and children. An account has been established with Sauk Valley Bank in the name of “Garrett Ramos Memorial Fund” and donations are being accepted at all SVB locations. An online option for donating will be forthcoming.