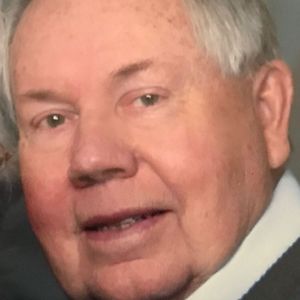 Bill Peters of Milledgeville, IL passed away peacefully at Rock River Hospice and Home on January 14 at the age of 87.

Bill Peters was born July 20, 1932. He was the second child of Gerald and Gladys (Goodell) Peters of Prophetstown, Illinois.

Bill grew up on farm near Prophetstown with his sister Eureath (Bollivar) and his favorite dog Ted. Bill attended one room country school and then graduated from Prophetstown High School in 1950. He enlisted in the Illinois Army National Guard, was federalized and served in Korea. After returning from Korea in 1953 he began farming, a career he would follow for the next 50 years. He first farmed south of Prophetstown with his father, then from 1959 on he farmed north of Milledgeville. During his free time when he wasn’t milking cows, farrowing hogs, feeding cattle, raising sheep, baling hay and growing crops, he drove a school bus, served on the Soil and Water Conservation Board, the Farm Bureau Board, spent twenty plus years as a Wysox township trustee, sold Pride brand seed and was active in the Milledgeville Brethren Church. The one thing he never did was raise chickens. He had a lot of chicken chores as a kid and absolutely refused to allow a chicken on his place.

Shortly after returning from Korea, a friend from Prophetstown set Bill up on a blind date. Bill’s friend was dating a girl that lived at the YWCA in Sterling. His buddy’s girlfriend knew a young, pretty girl from Milledgeville that was also living at the Y. In a fit of poor judgment, Bill didn’t show up. His buddy tried to set them up again, but the girl said, “If he wants to go on a date, he’s going to have to call me himself!” This time Bill didn’t mess it up and gave her a call. He said, “As soon as I called and heard her voice, I knew she was the one.” He took her out in his ’49 Chevy (also known as ‘the shiniest car in Prophetstown’). He convinced her to marry him and they were wed on June 12, 1955 at the Brethren Church in Milledgeville, Illinois. They had been married for 64 years when he went to go wait for her in heaven. His dog and his Chevy were waiting for him.

Bill bowled and played softball as a younger man. He always enjoyed going to his children’s school and sporting events and later in life he made every grandchild’s event that he could. He was a life-long Cub fan. His favorite color was IH red.