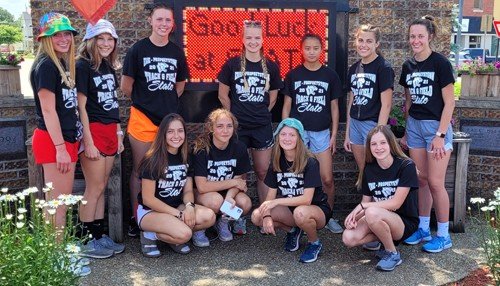 Several members of the Lady Panther track team were given a send off from Erie on Wednesday just before Noon. The team was ushered out of town with sirens wailing and fans waving.

The team qualified two relays and four individuals for the IHSA State Finals on the blue oval at Eastern Illinois University in Charleston. In keeping with the times the format was changed from a two-day event to a single day of competition.

Panther coach Stacy Bomleny said the change will alleviate the problem of the usual one day layoff for the 1A teams, but the athletes also lose the opportunity to gain a day of rest between the prelims and the finals.

Field events will begin around Noon on Thursday with freshman Kennedy Buck competing in the shot put and the pole vaulting duo of freshman Olivia Purvis and junior Haley Wuebben participating in the pole vault.

Junior Riley Packer will run in the 800m. The team of Jorden Robinson, Jade Nickerson, Jillian Norman, and Brooke Lalley will be looking to place in the 4×800 relay with Dylan Chandler, Jade Nickerson, Buck, and Packer running in the 4×400.

The two highest seeded Panther entries are Packer 12th in a field of 29 and the 4×400 which is seeded 13 out of 29. The seeds are determined on sectional results.