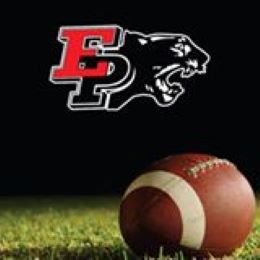 The EP football team, coaches, and parents recently gathered for the annual awards celebration in the Erie High School gym to celebrate the most successful season in program history.

The Panthers started the season 0-2 before reeling off 7 straight wins to win the TRAC West Division Conference title and qualify for the IHSA Class 2A playoffs. The team advanced to the second round of the playoffs and earned many post-season honors.

The F/S team finished with a 7-2 mark with head coach Kyle Foster saying, “a lot of potential and talent in this group” as they move to the varsity level.

Varsity head coach Jesse Abbott started his portion of the program by thanking a long list of people who helped in multiple ways during the season.

Abbott said after the 0-2 start to the season the team had to decide what the rest of the season was going to look like. After a lopsided win at Sherrard in week three Abbott said the team realized their potential and decided, “This is the team we are going to be.”

One of the top highlights of the season was the home win over perennial power Rockridge 50-48. Abbott called it a “statement” game and said it was the game in which the players proved they were a legitimate team, capable of competing with any opponent.

In reviewing the season Abbott said, the “one play at a time” mentality that the team adopted produced big dividends down the stretch especially in the win over Monmouth-Roseville to win the conference title.

In talking about the final game of the season, a second round playoff game against Kankakee Bishop McNamara, Abbott said, “To go to a place like that and not be intimidated, to not show fear, to not back down in any way was incredible. It was not the outcome we wanted but I was so proud of who they were and what they did.”