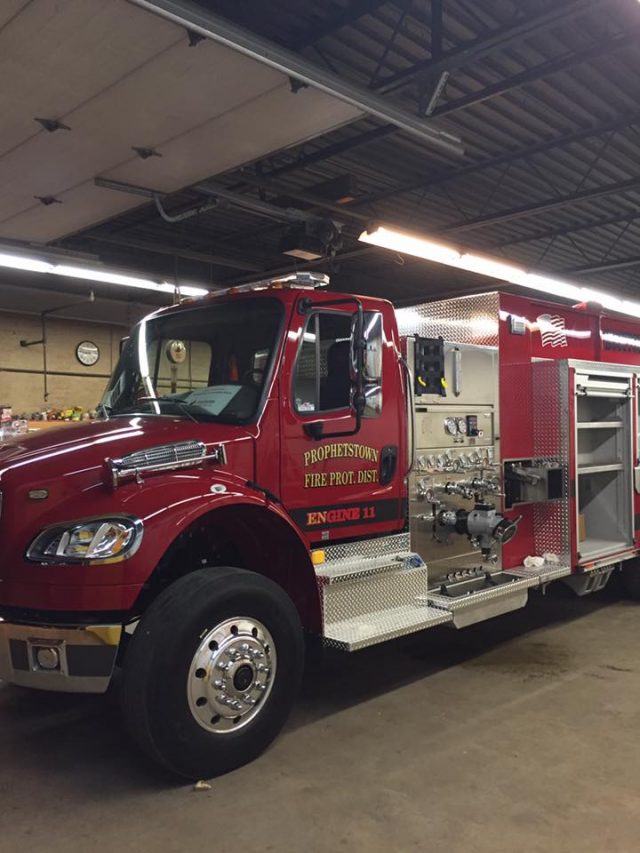 The Prophetstown Fire Protection District trustees received good financial news at the beginning of their September meeting. The current budget is on par and the Lyndon Department’s expansion has come in under budget.

District treasurer Karen Stuart reported the district is one third of the way through the financial year and all accounts look good. Incoming tax revenue will be directed to the building fund which was depleted due to the construction of the addition to the Lyndon Fire Department.

With just a few small bills outstanding the cost of the Lyndon addition will be approximately $ 221,000 which is about $8,000 under the estimated cost. The money for the project came from the district’s building fund with no loan required.

A memorial donation in the amount of $100 was received from the family of Darrell “Doc” Sampson.

Stuart suggested that the board consider purchasing a 36-month CD which will earn 2 ¼% interest with Farmers national bank. Currently the funds are in a money market account making less than 1% interest.  The board approved purchasing a $50,000 CD with FNB.

Board President Bill Jacobs announced that a new policy regarding proper meeting conduct has been instituted. He emphasized the need for those attending the meeting to refrain from sidebar discussions. He also asked that phones be turned off or silenced and there would be no texting during the meeting.

The district responded on 14 calls during the month of August.

Most of the new firefighting turnout gear and helmets have been received. The gear was purchased with a grant from the Moore Foundation.

Beginning of the school year fire drills were held at the Prophetstown 6-12 Campus and grade school.  A problem was found with the alarm system on the 6-12 campus in the old part of the building. It was surmised that the problem was due to a lightning strike that damaged the system over the summer. The problem is being investigated. The grade school drill went off without any major problems.

The possible purchase of a new truck for the Lyndon Department has been pushed back two weeks due to a delay in delivery.

The department will conduct a training on fire extinguishers with Winning Wheels in October.

Seven district personnel have signed up for a basic firefighting course which begins in November.

Thanks to all those who volunteered to help with the annual pancake breakfast.

The children’s water fights at the Whiteside County Fair went very well. The event was sponsored by the district along with Erie and Tampico Departments. Thirty-eight children took part and the district would like to hold the event again next year.

Training in August was the vehicle driving test with twenty-six personnel participating. The September training will focus on pump operations.

The department has applied for the Compeer Financial Grant asking for duty clothes (uniforms) and traffic safety equipment.

A new keypad entry system has been installed on the storage garage.

A grant request has been made with Compeer Financial for a new washing machine.

Thank you to all those who helped support the breakfast. Just over 600 people were served.

Expressed his appreciation to the crew that assisted on an accident call on I-88 recently, saying they did a phenomenal job in difficult circumstances.

Have applied for a Compeer Financial Grant to purchase a vent saw and a chainsaw.

Lyndon is still awaiting the plumbing inspection to complete the truck fill standpipe in the new addition.

The building committee is continuing to look at financial options for an expansion at the Prophetstown station.

New exterior lights have been installed on the Prophetstown station.

One of the main garage doors the Prophetstown station has been serviced. Additional work is needed to replace a window in one of the garage doors and service the ambulance bay doors.

Repairs have been made to the phone system and the HVAC at the Hooppole station.

Still awaiting word on a grant from FEMA.

Trustee Nels Carlson suggested a committee be formed to plan a district volunteer appreciation event to help build camaraderie among the departments.

Motion was made and passed to purchase $500 in supplies for Fire Prevention Week activities in October.

Discussion was held on establishing a protocol for district personnel to seek counseling services after experiencing traumatic events. Julie Pope reminded the group that the Blackhawk Fire Association has a service that is offered to area departments.  Other suggestions included contacting local ministers or former department personnel to offer support when needed. The idea will be explored further.

Chief Gerald Armstrong suggested the district consider purchasing a software program that would help keep track of personnel training. He will look into other uses and cost of the program.

The service responded to 44 calls in August.

The service will be providing a standby ambulance at all JFL and high school football games in Prophetstown.

The ambulance service meetings will be moved to the third Wednesday of the month at 6:00 at the ESDA building.

Still awaiting reply from the FCC regarding the service’s expired radio license.

A CPR course will be held for Hooppole Department personnel in the near future.

Two ambulance personnel have begun their paramedic certification class which will take approximately 2 ½ years. Discussion was held on helping pay the $2,800 tuition.  Pope said she hopes that CGH will pay some of the cost. No action was taken.

Another member of the service needs to attend ten refresher courses in Rockford in preparation for taking the paramedic certification test. Trustees approved paying mileage for the trips to Rockford.

Pope received the call from a local resident who is a retired firefighter who is willing to recertify as a basic EMT.

The next district meeting will be held on Monday, October 14 at 7:00 in Prophetstown.