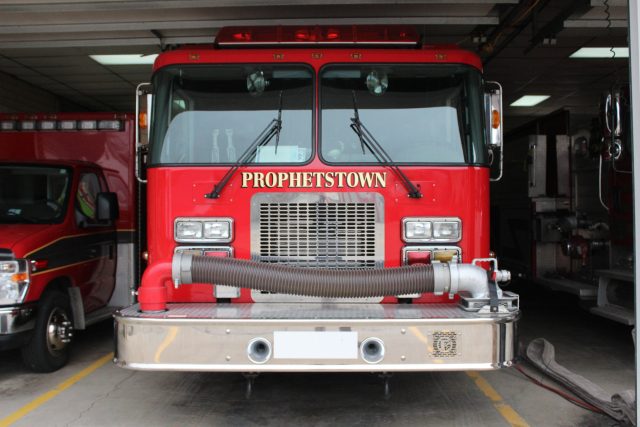 The Prophetstown Fire Protection District received news during its January meting that they have received approval for financing the expansion of the Prophetstown Station. Trustee Keith Crady announced that financing has been approved from Midwest Bank. He will be in contact with the district lawyer to draw up needed documents. The building committee will meet to discuss the next step in the expansion process on Thursday, January 23 at 6 PM.

Agreed to move $50,000 from the equipment reserve fund to purchase a CD with Farmers National Bank.

Discussion held on what to do with Lyndon Squad #3 as it is no longer used as a first responder vehicle. It was decided to keep the truck and use it for personnel transport.

Approved adding three additional air bottles to the refill system at the Prophetstown Department. Cost should be less than $1,000.

Reminder that the district appreciation dinner will be held at Prophet Hills Country Club on Saturday, January 25.

State of Illinois has opened applications for the small equipment grant. The district will apply.

Amboy Fire Department will be hosting a fire school on April 4 and 5.

Last weekend of April the district will conduct a prom disaster drill in conjunction with the high school. The drill is held every four years.

District training will be held January 15 the Prophetstown Station.

New training schedule has been published.

Assistant Chief will be attending the Whiteside County 911 meeting this week.

Asked preapproval from the trustees for a new applicant subject to approval by the Lyndon Department.

Computer issues have been resolved.

New computer software for truck checks and training is continuing to be implemented.

Prophetstown station working to complete paperwork for purchase of kitchen refrigerator and freezer.

Department responded on 45 calls in December.

Backup generator for the ESDA building has been delivered and will be connected shortly.

First responder class will begin February 22 at the Prophetstown Station. Class will meet on alternating weekends. There are currently 15 people registered for the class and the application deadline is February 7.

Continuing to remind crews to avoid the intersection of Railroad Street and Washington Streets due to poor visibility.

Scheduling issues have been minimal.

The director will be speaking to high school students about becoming involved in the ambulance program.

District residents who complete the first responder course, will be reimbursed for half of their course cost by working a designated number of shifts per month for the department.

Received a donation of a washer and dryer for laundering items used by the ambulance service from Ron Hansen. They will be installed at the ESDA building shortly.

Approved $1,000 from the Memorial Fund to purchase two new breathing bags for the ambulances.

Next district meeting will be Monday, February 10 at 7:00 PM.