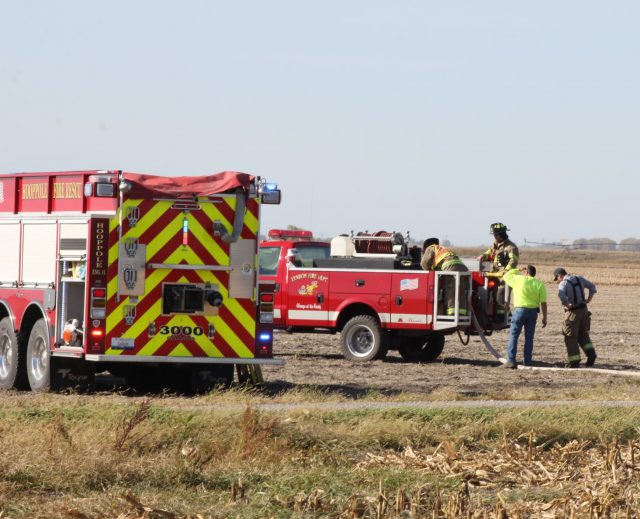 The first fire began near Hahnaman and Coleta Roads just west of Tampico just before 2:00 PM in a field owned by Cathy Mitchell.

The fire started when a soil tester, working for Rock River Lumber and Grain, had his UTV (Utility Terrain Vehicle) catch fire in the northwest corner of a cornfield that had recently been picked.

The fire spread from the vehicle to the field and was fanned by gusty west winds. Several area fire departments responded with brush trucks and tankers to extinguish the flames. A few area farmers also brought tractors with discs in tow to help knock down the flames.

The UTV was completely destroyed, but nothing else was damaged and no injuries were reported.

As crews were preparing to leave the scene a call for a second field fire was received for a corn field, near the intersection of Matznick and Star Road about five miles north of the first fire.

An organic fertilizer was being spread on a cornfield when its high temperature, due to self-combustion, started the field on fire.

Crews were on scene very quickly and extinguished the fire in a matter of a few minutes.