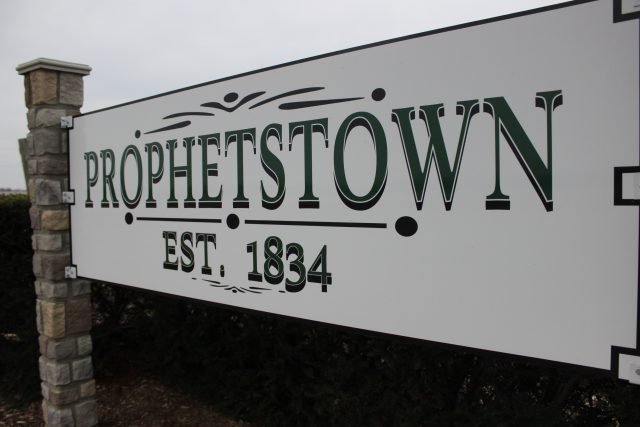 The purchase of a new backhoe for the Prophetstown Public Works Department led to a lengthy discussion during Tuesday night’s monthly meeting. Two agenda items were dedicated to the purchase, the first was to authorize a waiver for the competitive bidding process for the purchase. Aldermen Daryl Drennen voiced his concern that passing such a waiver could set a bad precedent, which could lead to forgoing competitive bidding on other purchases. He stated that the competitive bid process should involve advertising for bids which was not done in this case.

Mayor Steve Swanson, who joined the meeting via phone, said the intention in this case was to expedite the purchasing process as the city’s current backhoe is in disrepair. Alderman Greg Schmitt, who is a member of the public works committee, said the original intention was to look for a used machine but after research the price differential between a used and new machine justified looking for a new machine.

Schmitt said he accompanied Public Works Director Brian Strike to look at a piece of used equipment and both agreed it was not worth the asking price. Strike then went on to get bids from three different manufacturers in the area. The resolution to approve the competitive bidding waiver was adopted.

Discussion then shifted to approve the purchase of a new backhoe. Strike recommended to the Council purchasing a John Deere 310 SLT Backhoe from Martin Equipment of Rock Island, Illinois at a cost of $92,000. Aldermen Josh Hovey, a member of the finance committee, suggested that the city cash a CD valued at $72,950 to help pay for the purchase. Fellow committee member and Aldermen Ryan Inskeep became upset saying he knew nothing about the financing plan prior to the meeting. “It’s frustrating to be on a Council and not know what we’re doing,” said Inskeep. “This should have been ironed out before we got here.” Eventually the Council agreed to use the CD and money from the general fund to pay for the backhoe.

Schmidt added that the purchase from Martin Equipment was well below the other bids for a similar product. The company also agreed to purchase the city’s backhoe for $6,000 and provide a loaner until the new equipment is delivered in 10-12 weeks.

The Council approved authorizing the sale of a city owned lot at 510 Washington St. The property has been advertised twice previously with no offers meeting the minimum bid.

A letter was received from Chelsie and Eric Vandyke requesting TIF Funds for building repair and updates for their new business at 310 Washington St. The couple estimated the cost of the work between 40 and $50,000. Hovey suggested that the request contain multiple bids, but since it did not, Schmitt suggested that the city provide $20,000 with a cap of $25,000 depending on additional bid information. The precedent has been for the city to grant 50% of the amount requested. The Council will vote on the item during their March meeting.

A discussion was held on upgrading the city’s and police department’s computers from Windows 7 to Windows 10 as Windows 7 is no longer receiving updates from Microsoft. Discussion led to concerns from Schmitt about the lack of cloud based backups for the computer files. City Atty. Tim Zollinger advised that there could be legal implications if the systems are not getting security updates. It was decided to have office manager Rhonda Carter contact the William and Mary Company where the computers were purchased and ask them for suggestions on updating and securing the system.

Approval was given for a warning siren maintenance contract with Fulton Siren Services in the amount of $716.68 for the 2020 calendar year.

Authorization was given for the city to borrow funds from the public water supply loan program. These funds will be used for the city’s new water treatment plant with construction set to begin this year.

The Council entered executive session to discuss the hiring of additional office personnel with the resignation of Kris Nielsen. No action was taken.

Electronic waste drop-offs will begin on April 18 and will be held three more times during the year. A driver’s license and water bill are required for drop-off of waste at the city garage between the hours of 9:00 AM and Noon.

A special meeting was held prior to the regular council meeting to discuss the application for a USDA Rural Development Grant for a police squad car. The grant is valued at $16,000 and would be used to replace the department’s 2011 Ford Crown Victoria.

Has been working on an inspection date and decal design, which will be used to license off-road vehicles in the city.

A building permit was approved for Keith Crady to install and 8 x 40’ storage container on his property located at 250 Market St.

Attorney Zollinger reminded the Council of the importance of an accurate census as several financial determinations by government entities are based on population. The amount can be worth up to $1,500 per person.

Mike Chastain from the Winning Wheels organization asked permission from the Council to hold the group’s annual summer concert series in Eclipse Square. He also asked permission to hold the organization’s Traumatic Brain Injury Fundraiser on August 29 which will feature a motorcycle ride, live music, games and food. He will meet with the police chief and public works director to work out the details. The Council will vote on approval next month.

Board member Heather Minssen reported the library and recently held a knitting and crocheting event to benefit the upcoming Parents For Students Fundraiser. Library is also moving forward with plans to paint and install new carpet in the basement and replace the building’s roof. The Library recently purchased four Wi-Fi hotspots that can be checked out.

The next monthly council meeting will be held on Tuesday, March 10 at 7:00 PM.