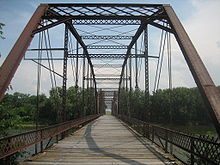 Craig Bohms was voted onto the Lyndon Village Board during Tuesday’s meeting to replace D.J. Sikkema who resigned in April.  Bohms, a longtime resident, will serve the two years remaining on Sikkema’s term. The action was taken during the board’s executive session.

Kodi Wright gave a final report to the village board on the annual Easter Egg Hunt held at Richmond Park in April. “It was phenomenal and we could not have asked for a better day. We appreciate everyone’s help and thank the village for stepping up and making the event possible,” said Wright.Wright shared some statistics from the event: 410 bicycles were given away, 1,534 meals were served, 6,000 prizes were awarded, 30,000 eggs were hunted, and 63 towns were represented from various states.  She added that there were no major problems and everything ran very smoothly. Mayor Doug Dunlap thanked Wright for a tremendous event saying, “You did a great job and we appreciate it.” Next year’s event will be held on April 11.

A representative from IMEG Corp. the engineering firm overseeing the soon to begin village water system upgrade project, presented the board with contracts. Dunlap signed the contracts and June 26 was set as the date for a preconstruction meeting for all interested parties at 9:30 AM at Village Hall.

Building permits were approved for Nora Poulter and Kelly Hall.

Approved a contract, contingent on proof of insurance, for $2,900 with Saw’s Tree Service to take down and remove trees on 4th St. East, Fifth Avenue East, and 4th St. West.

A new form pertaining to employee leave and establishing work hours from 7 AM-3:30 PM were approved.

Discussion was held on members of the board learning to take water quality readings when public works director John Wright is unavailable.  Wright contacted the Illinois EPA to seek guidelines and was told it is permissible if he receives documentation from the person taking the readings. He emphasized they are not allowed to perform any other type of operations.

Wright also told the board that the villages large dump truck needs new leaf springs, but after discussion it was determined to hold off on the repair.

Discussion was held on grinding and seal coating 6th Ave. West from the bridge to 4th St.  Several companies will be contacted to submit a bid.

Fisk was absent from the meeting but did submit a request for the board to approve repair to the air-conditioning system on the village police car.  Approval will need to be given at the next meeting as the item was not on the agenda.

The village garbage truck had a minor repair but is in relatively good shape and should be in service for several more years.

One of the village lawnmowers was damaged and costs for repair are being determined.

Quinten Castro resigned his full-time position with the department, which leaves Wright to work alone. The village is currently seeking a part-time employee.

The next full board meeting is scheduled for Tuesday, July 9th at 6:00 PM.