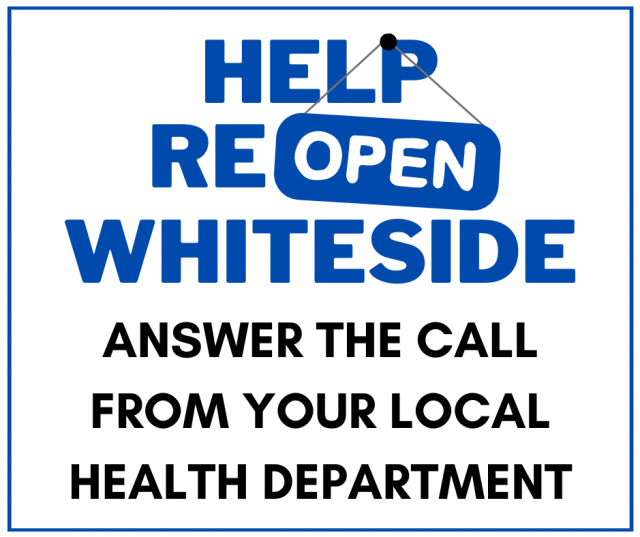 Governor Pritzker and the Illinois Department of Public Health (IDPH) are announcing additional COVID-19 mitigation efforts that will be implemented in Region 1, which includes Whiteside County, beginning at 12:01 a.m. on Sunday, October 25, 2020. After mitigation efforts initially took effect in Region 1 on October 3, the positivity rate has remained the highest in the state, with the region reporting an 11.9 percent rolling positivity rate today, October 22.

Region 1 has been under Tier 1 of the state’s resurgence mitigation plan since October 3, after seeing a 7-day rolling average test positivity rate of 8 percent or above for three consecutive days. Beginning October 25, Northwestern Illinois will face additional mitigations, such as a tighter gathering cap of 10 individuals rather than 25 and new table caps of six rather than 10 when eating out. Region 1 includes Boone, Carroll, DeKalb, Jo Daviess, Lee, Ogle, Stephenson, Whiteside and Winnebago counties.

“We’ve said all along that if things don’t start to turn around after two weeks in Tier 1, we can add more stringent measures to help usher in the progress we need to see to get things more open again,” said Governor JB Pritzker. “That is now the case in Region 1, which has seen its positivity rise by nearly two points since October 14 alone. Region 1, bordering Wisconsin and Iowa, carries the additional responsibility of navigating a situation where the massive surge of cases in our neighboring states will continue to have a spillover effect. There is no easy fix. So as colder weather comes upon us – and brings flu season along with it – it’s imperative that we take extra caution and extra care. Because at the end of the day, this is bigger than you. This is about all of us, and the communities we call home. We have to take care of each other.”

“We know that people and communities need to work together to lower viral spread and reduce the number of new cases being diagnosed,” said IDPH Director Dr. Ngozi Ezike. “I urge people in Region 1 to look at their activities and what they can do to reduce spread.  Consider postponing having people over to your home for a celebration, make sure you are distancing from other people, and wear your mask anytime you’re around others.”

These mitigations do not apply to schools or polling places.

In response to the rising test positivity rate across the state, the administration continues to strengthen its nation-leading testing operation. Illinois is now averaging over 70,000 tests per day and today the administration reported surpassing 7 million total tests. Testing is readily available throughout the state, as it remains a critical step to reduce the spread of the virus, given that a positive test result begins the contact tracing process to prevent further spread in Illinois’ communities. To find the nearest testing center, please visit DPH.Illinois.Gov/Testing.

In the coming days, IDPH will continue to track the positivity rate in Region 1 to determine if mitigations can be relaxed, if additional mitigations are required, or if current mitigation should remain in place.

IDPH has been working closely with local health departments in Region 1 to provide education to the public and offer information to businesses and organizations on safe ways to reopen.  The administration has also provided guidance to retail stores, restaurants, offices, and businesses, as well as guidelines for outdoor events, sports, and recreation.  The significance of face coverings, social distancing, and hand washing have been continuously emphasized by the administration throughout the COVID-19 pandemic.

On Monday, October 19, the administration announced Tier 1 COVID-19 resurgence mitigations will be implemented in Region 5, in Southern Illinois, beginning today, October 22. On Tuesday, the administration announced Tier 1 resurgence mitigations will be implemented in Region 7 (Will and Kankakee counties) and Region 8 (Kane and DuPage counties), beginning tomorrow, October 23. These regions are seeing a 7-day rolling positivity rate of 8 percent or above for three consecutive days, which exceeds the threshold set for establishing mitigation measures under the state’s Restore Illinois Plan. Currently, four of the 11 public health regions have now triggered the state’s failsafe state-action metric.

A full list of mitigation measures pertaining to some businesses and industries may be found on the DCEO website here.